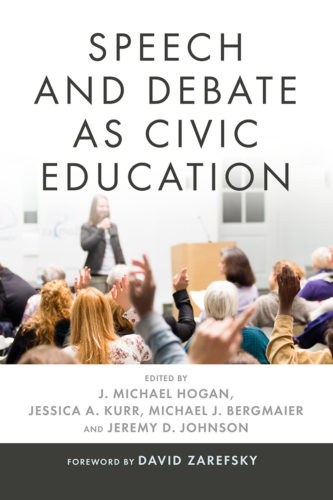 Speech and debate is a cornerstone of civic education because it fosters critical thinking, collaboration, and reasoned argumentation in a divisive world. My continuing work on the connection theorizes how coaches, teachers, and administrators can develop co-curricular speech and debate programs. In March 2015, I helped the Center for Democratic Deliberation organize and host a national conference, Speech and Debate as Civic Education. This conference, funded by the National Endowment for the Humanities and the National Communication Association (NCA), brought seventy leading scholars of speech and debate to Penn State to reflect on how forensics programs might contribute to civic education and engagement not only in the United States but also across the globe.

In addition to hosting this conference, I am the second editor of Speech & Debate as Civic Education (Penn State Press, 2017) as well as two journal special issues (one published in Communication Education 65.4 (2016) and the other published in Argumentation & Advocacy 53.2 (2017)). I have also been invited to participate in numerous conference discussion panels about public debate and outreach, and I regularly organize public events on Penn State’s campus, as the Director of Debate. To document these efforts, I am writing an essay, “Civic Education in Protopublic Debate Spaces,” on the connection between competitive debate and public outreach, which I plan to submit to Argumentation & Advocacy in fall 2017.